Hello, dear fans. It’s a bit weird to post a physicist’s death here as a pianist, but something I’ve never told anyone before is that I actually wanted to become a physicist and people like Stephen Hawking were my idols. Through various events I became a pianist. But I would like to pay tribute to the probably most intelligent man of our time. Rest in peace, Stephen Hawking.

However, I am still dreaming at times what I would have done in the world of physics. Please do not misunderstand me: I love my work and I’m happy to spread the music. That’s what life is. You never know where it will take you and what’s waiting for you the next day. But I know very well what kind of accomplishment these people afford day by day. And most without rum and appreciation. But I would like to pay tribute to the probably most intelligent man of our time. Rest in peace Stephen Hawking.

Here is the contribution of CNN: 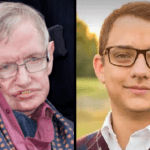 The renowned physicist and professor at the University of Cambridge made many discoveries in physics, mathematics and cosmology. Hawking suffered for decades from ALS, also known as Lou Gehrig’s disease. His early encounter with the disease during was depicted in the film “The Theory of Everything” in 2014. Renowned physicist Stephen Hawking has died at the age of 76. Hawking, who was a professor at the University of Cambridge, made several discoveries in the field of physics, mathematics and cosmology that raised his profile internationally. Cambridge University confirmed Hawking’s death to NBC News. His better-known works involve black holes and the theory of relativity. He also wrote a number of popular science books, including “A Brief History of Time.”