The VITA. Important things to know 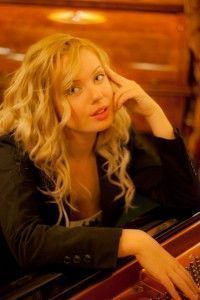 Born in Russia, Anastasia Huppmann discovered her love for music very early. At the age of five, she started playing the piano. When six years old the school board recognised her musical talent and Anastasia began receiving individual lessons for gifted children in piano, composition and music theory. At the age of seven she appeared playing her own music-compositions live on TV.

At eight, she won her first piano competition. She completed her piano studies with Prof. V. Daich at the State Conservatory in Rostov on the Don and with Prof. Th.Kreuzberg at the Vienna Conservatory, both of which she completed with distinction. Anastasia continued her education at the Academy of Music in Hannover (Germany). She participated in the solo classes of Prof. Karl- Heinz Kaemmerling until his sudden death.She also had the pleasure of participating in master classes with renowned pianists such as Professors Paul Badura-Skoda, Aquiles Delle Vigne , Lev Naumov, Boris Petrushansky, Dmitri Bashkirov, Lev Shugom, Krassimira Jordan and others.

Her most recent success was achieved in Spring of 2012 in France with the 1st Place in the International Piano Competition “14th Grand Prix International, Jeunes Talents’”.Numerous solo performances in the Ukraine, Russia, Austria, France, Poland, Spain, Italy, and active collaboration with various national orchestras have lead Anastasia Huppmann to the great concert halls of Europe and Asia.